And one philosophy - to incorporate into each scarf the complete knowledge we have passed down from one generation to the next. You can feel it. In every one of our scarves. 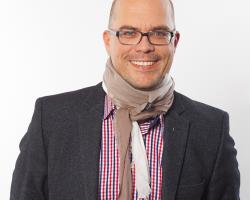 Is in charge of production and operations in the company. With a total of six production and logistic locations throughout the world, it’s a job with a lot of responsibility.

They are the heads of a 140-year tradition: Alexander and Andreas Schmidt.

Is in charge of the international sales markets. He’s proud to lead a company that manufactures itself.

How we came to be who we are.

So, you didn't like history in school?
Our company history will certainly interest you because a lot has happened since Valentin Fraas founded the company.
And the best is – it’s still happening.

1880: An entrepreneur in every fiber of his body, Valentin Fraas founded the company, V. FRAAS, in the Franconian town of Wüstenselbitz/Helmbrechts. Only ten employees to produce, among other things, neckerchiefs, head scarves, and shawls. Even then, scarves were our world, just on a smaller scale.

1894: However, change come quickly. Valentin’s son, Christian, takes over at the helm. With a lot of work, and even more talent, V. FRAAS grows. At the turn of the century, about 100 workers are employed.

1950 – 1960: After the war, but before the economic boom, the brothers, Arthur and Kurt Fraas, are the third generation to run the company and continue its growth. Despite language barriers (English was not a required school subject), the company succeeds in establishing the first important foreign contacts.

1985: The beginning of an innovation in textiles, the brand Cashmink® is introduced. Manufactured from high-quality acrylic, Cashmink® is even softer than cashmere. The brand becomes the most widely sold scarf in the world.

1991 – 1997: The Iron Curtain falls. With it, our success story continues into Eastern Europe. V. FRAAS opens sales offices in the Czech Republic, Russia, and Poland, and still further east in Japan and Korea.

2000 – 2003: One billion potential customers are waiting to be served. V. FRAAS opens 70 shops in China. Alexander Schmidt sets up a manufacturing location for knitted accessories in the textile city with the difficult-to-pronounce name, Zhangjiagang. Manufacturing strictly adheres to western labor standards.

2005: Andreas Schmidt is delighted to open the first FRAAS store in Berlin, Germany. The same year the company celebrates its 125th anniversary.

2006: The brand FRAAS - The Scarf Company is born.  Andreas Schmidt opens exclusive FRAAS stores in Germany. The new internet debut of the fraas.com online shop is open for business.

2010: Happy Birthday, dear Cashmink®. Our top seller turns 25 and V. Fraas proves that at 130 years of age, you can still be a trendsetter.

2011: The brothers Alexander and Andreas Schmidt take over the management of V. FRAAS and now officially follow in their father's footsteps.

2019 – today: “The show goes on”. V. FRAAS relies on proven quality standards and new trends to move towards the future with sustainable manufacturing and fresh ideas.

2020: FRAAS launches the sustainability capsule under the theme "Good for you. Good for our planet.". Sustainable textile accessories in the form of recycled products, "thought-out" qualities, and CO2 certification.

2021: Starting in Fall/Winter 2021, all our Cashmink® accessories (across brand FRAAS and private label) and our sustainability accessories (of our brand FRAAS) will be climate neutral. The compensation is done by our partner "Climate Partner" and contributes to a project in Africa ... hydropower for the habitat of mountain gorillas in the Verunga National Park.

To improve user behaviour, we use cookies on our website which do not store any personal data and are automatically deleted at the end of the session. If you want to learn more about this, please read our privacy policy.